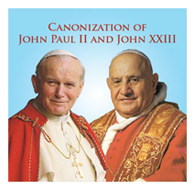 Arrival in Rome - Travel from airport to hotel.

Visit the Papal Basilica Santa Maria Maggiore, build in 356 after the miracle snowfall. Our Lady commanded the Pope to build a basilica on Esquiline Hill on the site that would be covered with snow the next day. Indeed, during that night of August 4, 352 in the very heat of the summer, a miraculous snow fell on the summit of the Hill, indicating the location for the church.

Visit San Paolo basilica tomb of St. Paul. Outside the walls is one of Rome's four ancient major basilicas - the basilica's of St. John Lateran, St. Mary Major, St. Peter's and Saint Paul. Walking tour to the Pantheon, Trevi Fountain which was finished in 1762 by Giuseppe Panini. The Spanish Steps are set of 135 steps in Rome, climbing to Trinita dei Monti church at the top.

Canonization Day -Visit to the Vatican City St.Peter's square. More and updated details will be announced at the Hotel in cooperation with local authorities. Afternoon free at own arrangements.

Sightseeing tour on foot, entrance to the 14th century Cathedral of Orvieto. The building was constructed under the orders of Pope Urban IV to commemorate and provide a suitable home for the Corporal of Bolsena, a miracle which occurred in 1263 in the nearby town of Bolsena, when a traveling priest who had doubts about the truth of transubstantiation found that his Host was bleeding so much that it stained the altar cloth. The cloth is now stored in the Chapel of the Corporal inside the Cathedral. See a Chapel of San Brizio and St.Patric Well.

Assis- Guide for city tour on foot (English speaking) Visit San Francesco basilica (guide explanation are permitted only by using official whisper system ASSI/WHIS – The basilica is one of the most important places of Christian pilgrimage in Italy. The Papal Basilica of St. Francis of Assisi is the mother church of the Roman Catholic Order of Friars Minor. Assisi is the city where St. Francis was born and died. 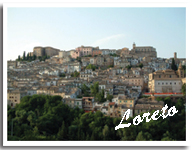 Loreto: Shrine of the Holy House of the Virgin Mary is preserved and venerated. It is the holy place defined by Pope John Paul II as “the true Marian heart of Christianity”. The sanctuary has been one of the most important pilgrimage sites for centuries, having been visited by approximately 200 saints and beatified persons, as well as numerous Popes. The Santa Casa is the house from Nazareth where the Virgin Mary was born, educated and where she received the Annunciation. The house was composed of one room in masonry and three walls in stone, placed so as to enclose a rock cavern.

Lanciano: The city is known for the first recorded Catholic Eucharistic Miracle - Visit Santuario Di san Legonziano -build in 1258 over a pre – existing 7th century church. The high altar houses the relics of the Eucharistic Miracle. This miracle took place in the 8th century in the little church of St. Legontian, as a divine response to a Brasillian monk doubt about Jesus; real presence in the Eucharist. During Holy Mass, after consecration, the host was changed into live flesh and the wine was changed into blood, which coagulated into five globes in differt shapes and sizes.

Monte Saint Angelo - Visit the Basilica Saint Michele and the Grotto. It is the oldest shrine in Western Europe dedicated to Archangel Michael and has been an important pilgrimage site since the middle ages. According to the history, the year 490 the Archangel Michael appeared several times to the Bishop of Sipontum near a cave, asking that the cave be dedicated to Christian worship and promising protection of the nearby town of Sipontum from pagan invades. These are the first apparitions of Michael in Western Europe. 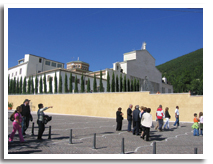 San Giovanni - The tomb of Saint Padre Pio of Pietrelcina. He died in 1968 and was declared Saint in 2002.

Pompei - Visit of the Pontificial Shrine of the Blessed Virgin of the Rosary of Pompeii. If time allowed, will be possibly for interested to visit Pompeii Archeological Museum (not included in the price tour price)

Visit the Abbey of Monte Casino Monastery – St. Benedict of Nurisa established his first monastery, the source of the Benedictine order, here around 529. It was the site of the battle of Monte casino in 1944, where the building was destroyed by Allied bombing and rebuild after the war. The site has been visited many times by the popes and other senior clergy, including Pope Benedict XVI in may 2009. Visit site of Polish or English Cemetery which holds graves of soldiers who died, storming the bombed–out Benedictine Abbey on top of the mountain in may 1944, during the battle of Monte Cassino. Aftennon some free time at St.Peter Basilica.

For over 20 years our knowledgeable staff has been renowned for providing customized, professional services to all our world traveled customers at the best rates available. We can help you plan your next Vacations or Worldwide Travel Destination Packages. We are specializing in Airfare Tickets, Customize Tours to Europe and Roman Catholic Pilgrimages.

Feel free to contact us by email, or by phone.